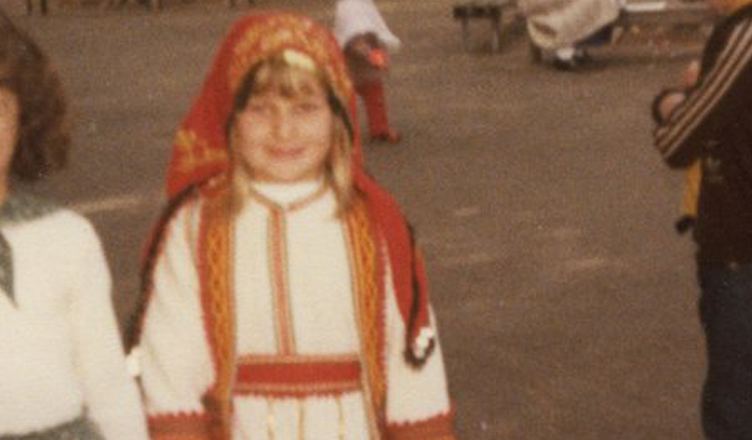 Well to be honest, my skin colour has always been white. Even as someone with 2 full-blooded Greeks for parents the whole olive skin passed me by. My hair, up until my 30s, was blonde and my eyes are hazel green. (Apparently lots of Greeks have hazel green eyes).

However we all know that being white isn’t purely about the colour of your skin. It’s about a system of privilege that has long existed….for, let’s be honest, eons.

When my parents first arrived in Australia in the 50s they were certainly not white. Being bashed for speaking Greek in the street wasn’t a totally uncommon occurrence.

Growing up, I was not white – not even in high school in the late 80s/early 90s was I white. I remember a bunch of girls in my English class debating whether I was Greek or Australian. Even though I was born here that didn’t really seem to count for much for the girl who constantly reminded me she was 6th generation Australian. The rub of it all was one of the girls who was born in England and migrated here when she was 5 was allowed to discuss my Australianess but I was not.

However, over time I did become white. My Greek surname and heritage started to become a thing of interest. Even to the point where an acquaintance once remarked that she wished she had a European background like me – “it’s far more interesting culturally than an Anglo-Saxon background”, she said.

While I was slowly becoming white, people from South-East Asia or the Middle East were receiving the brunt of the “are they really Australian?” critiques.

Now, Mr M, is of Italian descent. His parents migrated to Australia in the 70s and he was born here. We married and I took on his name.

My children have this Italian surname and not once have they ever been called ‘wog’. For a long time didn’t know what the term ‘wog’ meant – I had to explain it to them. They were stunned by my stories.

I am thankful my children don’t experience racism like I did. That’s not to say I don’t teach them what overt, systemic, and casual racism is, because let’s face it, they need to know.

Racism may not happen to us anymore, but that doesn’t mean it doesn’t still happen. It’s my responsibility as a functioning member of this society to listen to people who do suffer from racism.

After all, I remember what is was like to have my views disregarded.

It’s why I like to read Ruby Hamad – she’s a feminist who often focuses on the discrimination that people of colour endure.

She recently wrote a piece in Daily Life – Why ‘white saviour’ stories are past their use-by date.

Of course stories like 12 Angry Men served a purpose for their time, when racism was not only more explicit but actually enshrined in law, and when it was only white voices that were permitted to speak. But now that we are living in a time where racism takes more implicit forms, why are we still clinging to these outdated narratives that deny agency to people of colour?

So how do we challenge this? Is it time to let go of these classics altogether, or will that just doom us to repeat the mistakes of the past?

The answer lies in using them to support, rather than overshadow, contemporary stories that more accurately reflect the nuances of modern racism. All-white male juries may be a thing of the past, but white men still make the bulk of government decisions that directly impact on people of colour and indigenous communities.

Racism cannot be undone by a few good white people because it is a system that benefits all white people. It takes a willingness for the beneficiaries of white privilege to first acknowledge and then surrender this privilege. And that involves relinquishing their need to be the focus of every story, something that even some the most progressive white people are unprepared to do.

So white people need to step aside and let people of colour tell their stories.

I suppose my question is, as someone who wasn’t white, but is now deemed white, where does my story fit in?