My two eldest sons both participate in weekend sport.

The eldest A plays soccer; has done so since he was 6.

His younger brother C is enrolled in Jujitsu. This is his second year.

I love sport. I played several sports my whole life and only in recent years gave up playing netball. Creaky knees; slowing body; preference for being home and warm than out there and cold.

But this is Australia and I don’t need to convince any of you the merits of children playing sport.

In a competitive world, coaches can sometimes get a little riled up.  I’ve been on the other end of it as a player; I’ve seen my son’s soccer coaches over the years get “passionate” too – end of season, finals games, kids’ losing their focus, kids’ losing games, kids’ rising to the occasion, kids’ winning games.  We all know how this works.

My son, A, seems to cope with all that emotion and excitement. The ebb and flow, the up and down of happiness, despair, disappointment, success.

But on the weekend I saw a very different way of coaching kids. As I said above, my son, C, does Jujitsu.

On the weekend C had his Jujitsu grading. He’s been through the grading process before so we all knew what to expect

Well over 50 kids get together, from all coloured belts, to show the trainers what they’ve learned.  It’s chaos but never never do I hear any one of the trainers raise their voice. If there’s a kid not quite getting something, the trainer gets down to the kid’s eyelevel and simply speaks; positively. Giving advice on technique and on focus.

When the kids from lower belts finish their grading they sit down and watch the higher level belts continue. We watch non-contact sparring and the most exciting (and terrifying) part is when students need to kick and punch through the pine boards. 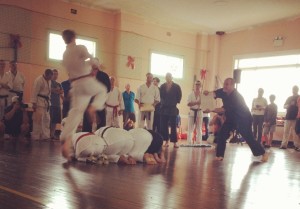 The atmosphere is electric. I don’t know these kids. But I will them to break those boards. I will them to fly over their trainers and kick the board in half. Not every kid manages to break the board on the first go. Some need several goes. But all the trainers (and there’s about a dozen of them) sit on the sideline coaching and giving advice on technique and focus; you now, positive reinforcement.  Not one coach ever loses their cool. They just change strategy. There is never a sense that a kid will not manage to break the board.

It’s a different kind of emotion; all positive.

And the roar of the crowd when the board is broken makes me feel good.

The overall philosophy here is there is no failure. Only success. Failure is if you stop trying because if you keep trying, you will succeed. Your only opponent is yourself.

My son comes home and says, “Mum, do you know what a black belt is? It’s a white belt that never gave up”.