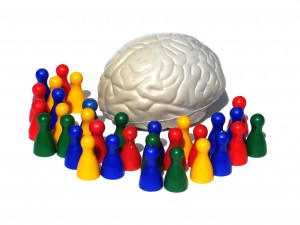 Kevin Lomax: What are you?

John Milton: Oh, I have so many names…

Okay, maybe Satan isn’t one of my, or Mr M’s, known identities but we all have multiple identities.

Most blogs you come across, the author will state that they are mother/father, brother/sister, friend etc.  We are defined by our titles and our experiences.  The party girl, the footy guy, lover, fighter… you get the picture.

Last weekend my two oldest friends and I were reminiscing about the stupid crap we got up to when we were younger.  Mr M was listening to us chat away while keeping a watchful eye on our collective children to see if they were listening to our conversations.

There were seven kids in total aged 10 and under.  So they probably don’t need to hear how one night I was inebriated when I got home and couldn’t get in the house. Keys and keyholes were a bit tricky.  So in my short skirt and high heels I climbed over the garden bed and knocked on my sister’s window pleading with her to open the door for me.  Well my sister was annoyed that I woke her so she just pushed open her window and told me to climb in because she wasn’t getting out of bed.  So there I was with my bum in the air trying to climb in without breaking a bone.

Hopefully my children won’t read this until they are older.  And little darlings if you are reading this, then please take this as a cautionary tale.  You don’t need to get drunk….really.

But my point is my children have no idea of the party going chick that I was in my early 20’s. Or the rebellious, antagonistic teenager I was.

They know me as a stereotypical mum. I’m manager of the household and the one they defer to when there is a crisis; like a missing sock. I am the one trying to teach them how to behave, toe the line, respect, for rules and others.

I teach them about self control, (read: no need to get drunk)

My best friends see me as the partner in crime and therefore will not judge any stupid decision made cause we’ve all made them.

The rest of my friends see me as an opinionated extrovert.

My mum sees me as the baby of her brood who was bright but one that gave her the most grief.

My ex-bosses presumably liked me. They hired me.

The parents I see in the school playground? Well we’re all a bit sensible now aren’t we?

My husband sees me as his intellectual equal and strongest supporter.

And then there’s me.  There are days when I look in the mirror and think ‘no-one knows me at all’.  Not like I do.  There are thoughts and things I’ve done that are only for me.

My daughter is 10 now and it was around her age that I started to feel separate from my parents.  My own person, with my own thoughts and my own actions. The separation from my parents was apparent to me.  I wasn’t an extension of them anymore. I didn’t need them to form an opinion. But I kept that revelation to myself.

But if truth be told, I can’t reveal every little bit of myself. I do worry what people might think, or I already know what people will think so there’s not need to even go there.

Mostly it’s for me to be able to escape in my world, my thoughts.  When the roles I play all day everyday get too much I retreat into my parallel universe, if you will, and reassess, re-energise.

Who am I? A mother, a sister, a daughter, a wife, an aunt, a niece, a cousin, a friend, a confidante, a believer, a doubter, a worker, a lefty, a debater, a reader, a student, a teacher, an overthinker, a hard bitch, a softie, a loner, a crowd pleaser, a cryer, a writer, a thinker, a complicated chick.

I’ll let you, the readers of the blog, to make your own assessment of who I am.

We Are The Sum Of Our Total Parts

Julianjut - I AM NOW WHITE