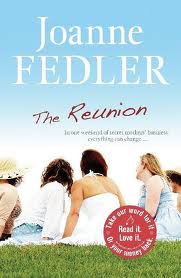 Last week I attended Joanne Fedler’s launch of her new book The Reunion; the follow up to her successful Secret Mother’s Business. The Reunion addresses mothers identities as their children grow into teenagers and aren’t as dependent as they once were.

During her speech at the launch Joanne said that it’s not that only that we are of age that our children might not need us as much, but we are probably of age where our own mothers have either passed away or, let’s face it, we heading into those ‘well you’ve reached life expectancy, so every year is a bonus’ phases.

Today when I was driving to my brother’s house for mother’s day lunch we passed Rookwood Cemetery. The line of traffic trying to enter the cemetery would put morning peak hour to shame.

“How sad”, I thought. It must be one of those horribly painful days when it feels like the rest of the world is celebrating; those people in the traffic jam were hurting.

How would I react if my mother passed away tomorrow? And to be honest I don’t know if I would be ‘absolutely devastated’ which is the common held viewpoint. I would be sad; but you see my mother isn’t my rock. She’s not someone I ever turned to. Ever.

It’s not that I don’t love my mother. And it’s not because I don’t respect her. Because I do love and respect her. And I am very aware of the sacrifices she made for me. She worried about me; she helped me; she supported me. But she never bonded with me; and that there is the broken link in the chain.

Hers was a different parenting style; from a different era. She grew up in a time when girls got married and had children. That was their lot in life. You didn’t marry for love; you married a good man who would look after you.

Even though I was an ‘accident’ my mother did show me love. I do remember the lovely things she did for me growing up. But she never spoke about herself. Conversations were always of a practical nature. She didn’t tell me about the birds and the bees. She was relieved on the day when I first got my period that I didn’t need her to explain what was going on because my older sister had already clued me in.

My sister had to find out from her friends.

But our relationship also had a reactionary element to it. You see the man my mother married, didn’t turn out to be so nice.  So for many years my mother stressed and worried about what type of mood my father would be in and spent equal number of years protecting us from his temper.

She spent so long just trying to keep the peace that I think the option of sitting around relaxing of a cup of tea to have a conversation was well…not an option.

We didn’t spend much time together as a family; purely because my siblings and I tried to avoid our father.

So those years when we should have been talking were spent either in silence, doing chores or in separate rooms.

I was jealous of my friends who had fantastic relationships with their mum. Who could go crying to her because they had a fight with their boyfriend or they are having trouble with schoolwork or they are just having a bad day.

There was no room in my life for that. Wasn’t allowed to have a boyfriend; and perhaps I should study more and bad day? I’ll give you bad day….

My mother didn’t have time or room in her life for my problems. She had her own. But like I said at the top, she has done a lot. And I know that I put her in a difficult position plenty of times when she would try to mediate a fight between my father and I. And my father would always say in disgust “that’s your daughter”.

Soon after I got married my mother did say to me that if she got cancer she wouldn’t treat it because her time here on earth had served its purpose. Her reasoning was she raised 3 kids who were independent and no longer needed her. She didn’t need to worry about us anymore; we knew how to take care of ourselves without her.

Now because of her age, she can’t babysit or help out with anything physical but she will buy me extra pasta if she sees it on special or chocolate Monte biscuits because she knows I like them.

We don’t talk everyday; maybe once a week. And again, conversations are usually of a practical nature.  How are the kids going at school? Did Alex score a goal in soccer?

I know what you might say. That’s it not too late to begin a real relationship. I’ve tried. I even think she’s tried but it just seems all too awkward so we just fall into our usual patterns.

In a backward bizarre way at least I know that when my mother does die, I won’t be so brokenhearted that carrying on without her will seem unimaginable. Sounds nasty but in a way I feel like I’m going to be spared emotional turmoil.

I don’t know what’s worse? To be brokenhearted or apathetic?