Last month when I attended Joanne Fedler’s launch of her new book The Reunion, I walked out of that room with a clothes peg, gifted from Joanne herself.

“Take this and give it to someone who holds you up”, she instructed.

I took this peg home and it currently resides on my desk. I haven’t taken Joanne’s advice and given that peg away; not because there isn’t anyone that deserves it. In fact, I have 1 peg and there are several people that deserve it, and I should tell them that they do hold me up.

But I keep that peg for me. For those days when I feel like crap, or have writer’s block, you know your general garden-variety blah. I look at that peg to remind myself that I got good people in my life.

My 2 year old L loves that peg. He always climbs up onto my desk when I’m working, takes the peg and instinctively clips it to his most treasured thing (….after me, that is).

His elephant/blankie comforter that he’s had since he was 3 months old.  His Diddy.

My daughter tried to teach L to say ‘piggy’ because we have a couple of guinea pigs. He could only muster ‘diddy’. And ‘diddy’ became the name for anything that was an animal. Including his comforter.

Diddy holds L up. Comforts him when he’s sad, helps him sleep and just generally keeps him company. If L is holding Diddy, then everything is right with the world. 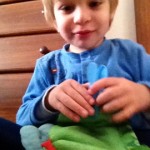 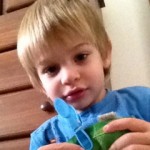 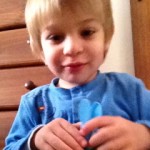