Earlier this week Tony Abbott unveiled a billboard in Perth, Western Australia stating how many illegal boats had arrived in Australia since Labor took office. 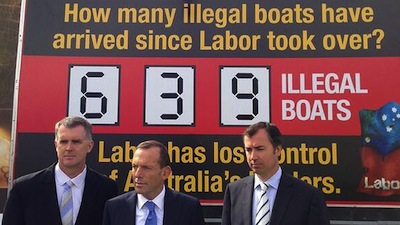 Social media, rightly so, lost its mind.  Because as so many have pointed out, these boats are not illegal. Tony Abbott is willfully lying to the Australian public, or he is just plain ignorant on legality of asylum seekers. Either way, not a good look for someone who wants to be a leader of a first world nation. 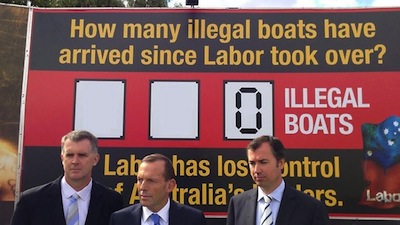 So I thought I’d do some light reading. Below are quotes from the official Parliament of Australia website.

Asylum seekers irrespective of their mode of arrival, like others that arrive in Australia without a valid visa, are classified by Australian law to be ‘unlawful non-citizens’. However, the term ‘unlawful’ does not mean that asylum seekers have committed a criminal offence. There is no offence under Australian law that criminalises the act of arriving in Australia or the seeking of asylum without a valid visa.

Asylum seekers do not break any Australian laws simply by arriving on boats or without authorisation. Australian and international law make these allowances because it is not always safe or practicable for asylum seekers to obtain travel documents or travel through authorised channels. Refugees are, by definition, persons fleeing persecution and in most cases are being persecuted by their own government. It is often too dangerous for refugees to apply for a passport or exit visa or approach an Australian Embassy for a visa, as such actions could put their lives, and the lives of their families, at risk. Refugees may also be forced to flee with little notice due to rapidly deteriorating situations and do not have time to apply for travel documents or arrange travel through authorised channels. Permitting asylum seekers to entry a country without travel documents is similar to allowing ambulance drivers to exceed the speed limit in an emergency – the action would be ordinarily be considered illegal, but the circumstances warrant an exception

Past figures show that between 70 and 97 per cent of asylum seekers arriving by boat at different times have been found to be refugees and granted protection either in Australia or in another country.

In contrast, asylum claims from people who enter Australia by air on a valid visa and subsequently apply for asylum have not had such high success rates historically and the majority have not been found to be refugees.

In other words, past figures show that more asylum seekers who arrived by boat have been recognised as refugees than those who entered Australia by air.

Although the proportion of asylum seekers arriving by boat has increased significantly in the last few years, and boat arrivals continue to be the focus of much public and political attention, they are in fact more likely to be recognised as refugees than those who have arrived by air.

There is no orderly queue for asylum seekers to join. Only a very small proportion of asylum seekers are registered with the UNHCR and only one per cent of those recognised by the UNHCR as refugees who meet the resettlement criteria are subsequently resettled to another country. As the overall number of asylum applications has continued to rise, states are increasingly taking responsibility for refugee status determination.

Australia has a long history of accepting refugees for resettlement and over 750 000 refugees and displaced persons have settled in Australia since 1945.

Overall the Humanitarian program is 7% of all migrants.

Boat arrivals still only comprise 50% of the Humanitarian intake. Making it 3 % in any given year.

7000 arrivals by boat. What’s 7000? Most would say it’s a poor showing to a sporting event. A modest number of people to a live show. 85000 people participate in the City to Surf.

It would take roughly 14 years for boat arrivals at current levels to fill the MCG. About 12 years to fill ANZ Stadium.

But in the hands of politicians like Tony Abbott, 7000 is like this evil ridiculously monstrous overwhelming number.

And quotes like this from an ABC interview in November 2012 make my blood boil. Obviously the man hasn’t read official documentation. Or if he has then it just makes him unfeeling.

Compared to the rest of the world, we take a miniscule number of asylum seekers and refugees.

Our population grows by 1048 people per day. 7000 asylum seekers per year arriving by boat is nothing to get worried about.

But who are the actual illegals here in Australia? Well that would be the overstayers.

The Daily Telegraph reported in June 2012

The number of visa overstayers – who entered the country legally and then failed to leave – has jumped by 3530 in just one year, data reveals.

Why don’t we lose our minds about that?

Chris Berg wrote an article for The Drum in September 2012 and he sums it up brilliantly.

Immigration politics is not about quantity but visibility.

By definition, asylum seekers want authorities to find them. Illegal workers do not. They are people who are working in breach of their visa conditions. They may have overstayed their temporary visas, they may be here on tourist visas, or they might be working more hours than their student visas permit.

It’s hard to measure, but we know there are at least 50,000 illegal workers in Australia. A Government report (PDF) in 2010 suggested it could be as many as 100,000.
That figure is a lot more than the few thousand who have sought asylum in Australia by boat.

Those dinky boats may seem like a threat to our “sovereignty”, but they are actually a demonstration of it. Our high-tech Navy picks them up, and our bureaucrats ploddingly process each one in turn. Every migrant interacts with the system at some point. There are no exceptions.

In almost every other country, borders are far too porous to imagine a government could be this diligent.

So stop freaking out Australia. We do have it good.

Finally, I am most annoyed at Tony Abbott because as a leader he can set the tone of the country for now and for years to come. But he is deliberately being inflammatory and misleading. And why? Because fear ensures votes? He’s just representing the constituents? Maybe the constituents need to be told that their fears are unfounded. That’s what a true leader would do.

Remember, Mr Abbott, the children are listening. It’s a hell of a responsibility when you are moulding young minds.

Take A Souvlaki and Baste it in Vegemite