A few of weeks ago I watched Alice Walker and Alexis Wright captivate an audience during the Sydney Writer’s Festival with their reflections on the world and how their activism has kept issues at the fore. 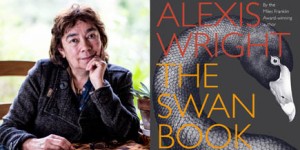 An audience member asked, with everything they had seen in their lives, how can the next generation not screw up the world?

Don’t let fear stand in your way advised Walker. It’s not that we are cowards if we let fear stop us but it simply means that we won’t become all that we can be.

Inspiring words; almost enough to throw caution to the wind. 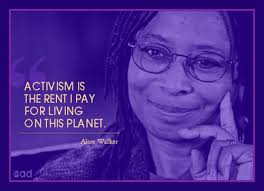 And then she said, “Good luck”. The audience giggled; that kind of nervous giggle we all have. When something is funny and scary at the same time.

You tend to walk out of talks like these promising to do something different. You look at the world around you, you look at your family and sometimes wonder ‘what the hell are we doing? Are we doing enough?’

During the SWF I was reading through the tweets and Thomas Keneally said “We used to live in a society, now we live in an economy.”

Another line that punches you in the face and demands you take sit up and take notice.

In Australia we are in fact in the middle of the some culture wars driven by our political landscape. The last time the ‘culture wars’ term was bandied about was when John Howard was prime minister. Coincidence????

Facts alone don’t motivate people; stories do. Stories create empathy. So many girls are victims of violence and denied education around the world but one girl named Malala Yousafzai has captured the world’s attention.

The single man who stood up to tanks in Tiananmen Square remains nameless but his story will be timeless.

And while all of this soul searching is taking place in my head Maya Angelou passed away. The internet for a few days was filled with quotes from Angelou.

Many of them encouraging risk.

I often wonder if we are teaching our kids to be risk takers; if parents are themselves not taking risks. And I mean real risk. But not stupid risk; I’m talking about risk that puts you out of your comfort zone.

My youngest is about to turn 5 and start school next year so a chapter in my life is coming to end.

But I need something to look forward to; something to propel me forward. I can’t simply exist and go through the daily motions.

I know I’m the sort of person who will never be truly content. I don’t think I’ll ever be satisfied. Well not for an extended period of time before I get antsy again.

There will always be one more book to read; one more musician to discover; one more film to watch; one more news article to consider. One more country to visit.

I recently read an article that said Australians don’t tend to move interstate too much.

So I turned to Mr M and said, “maybe we should spend 12 months in Europe. Send the kids to school there….and just do something different.”

Mr M turned to me, not with a ‘don’t be silly’ look, but with a slow nodding ‘I’m mulling this over’ kind of look. “We should probably base ourselves in the UK where the kids can speak the language and I think I can easily pick up work there. And we’ll bounce around from there.”

And with that simple conversation the wheels started to turn. Now I understand the massive undertaking and financial expense of such an endeavour but I think it’s worth the risk. I think the outcomes for myself and my children will outweigh how many dollars this costs.

If we want to participate in the world I think we need to try and see some of the world. Then you can choose what to be passionate about.

And Alain De Botton has a way of putting things that set my mind at ease.

“..we may value foreign elements not only because they are new but because they seem to accord more faithfully with our identity and commitments than anything our homeland can provide.”

“It is not necessarily at home that we best encounter our true selves. The furniture insists that we cannot change because it does not; the domestic setting keeps us tethered to the person we are in ordinary life, who may not be who we essentially are.”

I don’t know if we’ll make it over there. The task might just be too much; but I’m willing to give it a red-hot go. Nothing ventured, nothing gained.