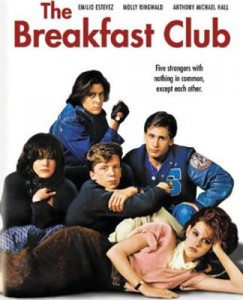 For anyone who knows me personally, you know that I am an 80’s tragic. And I’m proud.

Most you 80’s tragics already know that The Breakfast Club was on Australian television last night. Most of you on Twitter were blissfully reminiscing about our time, when we were young, when we were the next generation, when we were the ones who were different to our parents and we were going to change the world.

Even though I am a parent now, I still feel like a child because my parents are still alive and that parent/child relationship still exists.

It’s not uncommon to hear me saying “Oh mum, you don’t understand”. You could say that has less to do with my age and more about my relationship with my parents. It never really progressed to mutual adult friendship mode. A couple of years ago I realised it never will.

I wonder why that is; because my parents can’t let go of the ‘parental’ tag or because as teenagers it was uncool to get along with your parents.

But that’s a huge generalization to make. Did each and every one of us not get along with our parents when we were teenagers?

I used to envy some of my friends who seemed to have great relationships with their parents.

I mean, sure, they complained about their parents from time to time but on a whole their relationship was great. Well it seemed great to me. Maybe they thought differently.

And that is the crux of The Breakfast Club. Everything is not as it seems. But perception is powerful. Perception leads to belief. But does that make it true?

Andrew Clark: My God, are we gonna be like, our parents?

My eldest is 10 years old. I’ll sit down with her in about 5-6 years time and watch The Breakfast Club and ask if this movie means anything to her?

And I will see what it’s like to be on the other side of The Breakfast Club story.

Carl: Come on Vern, the kids haven’t changed, you have!

Carl: Come on…listen Vern, if you were sixteen, what would you think of you, huh?
Richard Vernon: Hey…Carl, you think I give one rat’s ass what these kids think of me?
Carl: Yes, I do…
Richard Vernon: You think about this…when your old, these kids; when I got old, they’re gonna be runnin’ the country
Carl: Yeah?
Richard Vernon: Now this is the thought that wakes me up in the middle of the night… That when I get older; these kids are gonna take care of me…