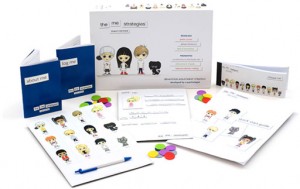 The ‘Me’ Strategies Part 1

So this box I’ve just opened up is extensive. A little daunting and I realize that I need about an hour just to go over everything and really understand the purpose of all of this.

Now that sounds like hard work. And it is. But let’s face it, if you do this half-arsed then it’s not going to work.

First up I have to say it kind of looks like a reward chart. Penny explains on the website why it is different to a rewards chart. In short, the me strategies is a little more flexible when it comes to the child receiving said reward.

But this is how it works; the really short version.

You pick up to 5 behaviours/tasks that you want your child work on/improve. If they meet that task for the day they get 1 point. 5 tasks = maximum 5 points a day. (If they do something extraordinary you can give a bonus point).

Now points are given daily on a board so your child can see their progress.

What happens with those points? Well you choose rewards with a varying level of value. Ie a kids magazine is worth 12 points. A milkshake is worth 8 points. A later bedtime is worth 15 points. So you can choose things that have a monetary value or not.

We decided that if the kids wanted something of monetary value then each point was worth 50c.

So Mr M and I went through to choose what behaviours that we thought each of children needed to work on. What we found kind of amusing is when we presented these goals to our children each of them instantly reacted

For example, we set my daughter the task of being a little less argumentative. Well when she was told that she began to argue with me. “No I don’t”, she exclaimed.

My oldest son got mad when I said he needed to control his anger and my 2nd son whinged when I told him he needed to whinge a little less.

I really don’t know if that’s comical or tragic.

What was interesting was my daughter has a tendency of being a ‘know it all’; and when she does that my eldest son usually reacts angrily. So what I was hoping to gain out of using the me strategies was a more harmonious relationship between my children as well as their individual habits.

As we were reading the list of behaviours you realize that there’s actually quite a lot of good you’ve done with my parenting and that my kids aren’t the worst people in the world. I actually realize how well behaved they can be. I’m sure this would be a common reaction with other parents too.

Now the kids and I sat down to work out the different rewards and attribute a value to them. I think this was the trick to helping them take ownership over what was happening. So it wasn’t just me dictating the terms, which if you remember when you were a kid was almost the worst thing in the world to happen; to be talked at.

What I didn’t see coming but gave a warm and fuzzy feeling was the kids asked if they could pool their points together to redeem a reward. This wasn’t in the manual. But I thought it was a good idea as long as they all redeemed an equal number of points. The reward was generally things like going bowling, iceskating, movies etc. You know, whole group activities.

And I decided that we would redeem points every two weeks. The manual suggests that you can redeem points as often as you like and that it’s not a bad idea since it will help kids stay motivated if they receive a reward more frequently than having to wait around for it.

But for me, I wanted to teach my kids a little bit about delayed gratification, which is why I started with 2 weeks. The beauty is that I can change the frequency any time I like.

A log book and tokens are supplied to help keep track of points given point redeemed for rewards.

The kids were happy, they chose their characters. Now the pack comes with 2 sheets to put your child’s point on but I have three so I used a magnetic board to put all three kids on there and placed the board in the kitchen; the place that gets the most foot traffic.

I did start this in the school holidays knowing full well I would have to revise their goals once they started school.

Remember in my first post I wrote that my eldest son had an issue with washing his hair? Yeah well, that was one of the things he had to do.

Next week, the results.