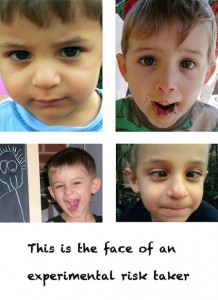 My eldest son A just recently turned 9. For me 9 is a milestone age. We’re half way to raising this little boy into being an adult.

And even though this isn’t the done thing, I did compare the two about where they were in the development at age 9.

By the age of 9 I expected a certain level of maturity and common sense.

J is a calculated risk taker. I’ve taught her to be that way. Or so I thought.

A is not a calculated risk taker. He really doesn’t think first and act.  He is the other way around.

Now you may say that boys and girls are different.  Perhaps there is an element of truth in that but my second son C is 6 and I can already see he’ll be a calculated risk taker too. In fact he seems to be a little too sensible and mature for a 6 year old.

But that may be because he has seen what his older brother A has gotten up to and has decided that he wants none of that.

Anyhow, I was trying to work out how to describe A; what kind of risk taker he is. And then my husband’s brother-in-law said it. “He’s an experimental risk taker”.

Now I’ve never heard of that term before and I don’t know if you have, but it fit A perfectly.

There’s no way around it.  I think he was just born that way. Because I’ve tried to teach my kids the same things along the way but A has decided that he doesn’t like my calculated risk approach. And I don’t think there’s anything I can do about it except be there to pick up the pieces if it all goes haywire.

I often joke that my job is to make sure he gets to 18 alive. He is gagging to get to 18. He thinks that when he’s an adult all the constraints of being a kid will be lifted and he’ll be free to do what ever he wants.

But that’s a life lesson he’ll have to learn on his own. And who knows, maybe he’ll be able to live his life with the carefree wild abandon that I sometimes wish I had. And nothing may ever go wrong for him. More power to him.