I went back Downtown to tackle the Greenwich Village, East Village.

Both these villages are a little more gritty than West Village.

Now I was just walking around and you know that feeling when you’re compelled to walk in a particular direction.  That’s exactly what I did. And I came across Café Wha. 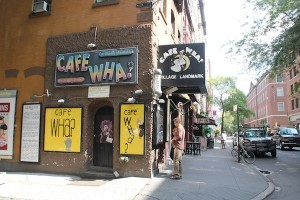 In the East Village I saw roadies unloading a truck for The Mighty Mighty Bosstones.

And I finally found some more CD shops and bookshops. They really seem to be devoid of these midtown.

In keeping with my musical theme I saw Rock of Ages. It was playing in the Helen Hayes Theatre. It’s not a big theatre so it was far more intimate. It definitely added to the atmosphere and we really were dancing in the aisles.

Let’s just hope Sydney gets its act together and finally brings the production there.

On Day 9 Fiona (fellow blogger) and I took the Staten Island Ferry just so we could take a closer look at the Statue of Liberty.

But I wasn’t satisfied. So off to Coney Island I went. Remember how the other day I was talking about The Warriors and Coney Island?

Well here’s the Wonder Wheel. And the ocean.

And in keeping with all things movie themed, Fiona wanted to go to Serendipity 3, in the Upper East Side, that was featured in take a guess? Serendipity. 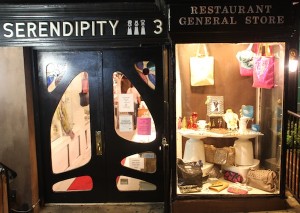 There’s no bin juice smell in the Upper East Side either.

I had a frozen hot chocolate. It’s a dessert just in case you couldn’t guess. It takes like a hot chocolate but it’s frozen with warmed up cream. It’s opposite but still very delicious.

I only have a few days left and I finally feel like I’ve slowed down. When I first got here I was on the go at a hundred miles an hour to get to see everything.

But now, now I am just taking it easy.

Next, Soho, Nolita and Little Italy.